“Each one of you will put to flight a thousand of the enemy, for the Lord your God fights for you, just as He has promised.” Joshua 23:10 (NLT) 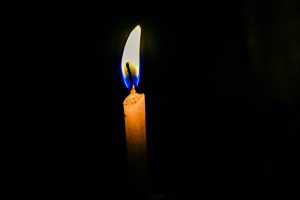 Today, as I blanket myself in numbness watching the pain that engulfs our country, the idea it only takes one comes to mind.  It only takes one to shock our country into compassion. George Floyd was the one.  While he was not the only senseless murder of a person of color; he was the one. The one who the world watched in horror as his life ebbed away with a knee on his neck and the person inflicting this horrendous crime did not even look down to acknowledge this was a human being beneath his knee.  The pleas of “I can’t breathe” and the calls out to a mother, long deceased were not enough for him to acknowledge this is someone’s son, father, brother, husband, friend.  So, why is it with all the senseless killings of Black people I know about, did this incident with George Floyd leave me speechless and numb?  It occurred to me, this is so different because, to me, what happened to George Floyd is akin to a modern day lynching.  Knee on neck; a slow, eight and a half minute, painful death; in a public place with people watching at the hand of a white person of the law. Not saying this to incite, elicit pity, instigate, or make matters worse. This is just the way I see it. This is why this time, the incident, in my eyes, is so deplorable.  Yet, that one horrific incident started a worldwide movement of acknowledgement and hopefully, compassion.

But, I still cannot completely wrap my head around this one.  Being born in 1950 and raised during the 1960’s, I have seen firsthand the “colored only” signs at water fountains, bathrooms. The “colored section” on the Clearwater Causeway where we would go swimming, the “whites only” rules at the lunch counters in downtown St. Petersburg, FL.  I can remember standing outside one of those stores on Central Ave, looking through the window,  watching white people sit at the lunch counter, eating, wondering why I could not go in, sit at the counter and order a hot dog and a root beer. I have taken Liberation trains from Tampa to Washington, DC, Freedom bus trips from Baltimore, Md to Atlanta, GA;  marched, protested, been tear gassed, held up signs, chanted, prayed, attended rallies, participated in boycotts, wrote government officials. So, I am not new to these scenes of racial inequality that drive the protests we see today.  But, I ‘m tired; so very tired.

Then, a few days ago hope started rising up to ease away some of the fatigue when I went into a Family Dollar store. I was in line, an elderly white woman turned around and said I could go ahead of her; she had a full basket and I had a few items.  I saw her let one couple go ahead of her.  So, I said, “No thank you. Your time is just as valuable as mine. I can wait.”  Then, she turned around and said, “I’m so sorry about what happened to George.  It was so wrong.  It was murder. My husband and I watched the funeral.  I was so touched by all the speeches, especially his brother.”  She went on to say, “My husband and I want to do something about all this. Something has to change. “I teared up, looked at her as I allowed the depth of her heartfelt words sink in.  I could not find any words.  Then, slowly, I found my voice and said, “you just did.”  I went on to thank her for her kindness. Somehow, her words started a healing within me.  Acknowledgement from an older, white person who had lived through times when racial inequality was the norm.  She was the one. Her words, “It was wrong. I want to do something about it,” sank deeply within me.

I, too, want to do something about it.  But, what? Right now, I am not sure.  However, I know the answer is out there; it only takes one. I believe a deep seated, systematic change will occur. I just do not know when.  But I can hope.  I have to believe that, One, a Higher Power, God, is in control of this tide.

My brother, Billy, said, dialogue needs to be between whites and their white friends and family members. His wife, Cheryl, says, “reach one, teach one.” It only takes one. One to pause, think about words, not spew out insults.  One to unite, not divide.  One to strive to understand, not take offense. One to demonstrate hope, not indifference, not hate.

This is relentless faith. The action of one to light a flicker of hope; one elderly white lady telling me she and her husband wanted to do something.  If that idea of wanting to do something translates into action, if that action simply means talking to someone I have never talked to before, then, we can reach one and then another, then another…

God, guide me and lead me.  Show me how I can be a catalyst for change right where I am. Let me be the one and remember it only takes one and One is a powerful number.  Let me remember we are all in this together. Amen!!!