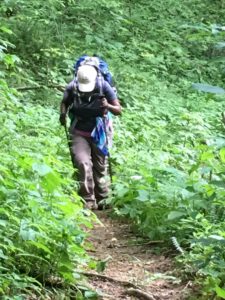 “God, please help me make it through this!” Tired and exhausted, I tried my best to keep up and hang in there, but I was feeling sick to my stomach.  This was the third day of a four-day hike on the Appalachian Trail (AT) in Franklin, North Carolina.  For twenty years I’d talked about hiking on the trail and had put it on my bucket list of things to do.  But, as a retired, 68-year-old teacher, I’d pushed this item farther down my list.  In fact, it might as well have dropped off. I hadn’t even discussed hiking the AT with my husband or daughter. My husband was busy with his lawn maintenance service and my daughter worked full time and was in grad school. But, the idea of one day trekking across the AT still crossed my mind every now and then.

One afternoon, I got a call from a prior co-worker who was also a good friend who said, “I’m going on the AT this summer.”  At least that’s what I thought he said.  “You’re going on the AT this summer?” I questioned.  “No, you and I are going on the AT this summer.  I am going to make sure you get your feet on that trail.”  He had been on the trail several times and during one of our conversations about his trail experiences, I mentioned hiking the AT was on my bucket list. But, I had been retired for five years and had no idea he still remembered our conversation. Although we had seen each other occasionally, we never talked about me going on the AT. Immediately, excitement welled up inside.   Me?  On the trail?  Without another thought, I said, “When?” He replied, “June 6th(2018).”  “I’m game.” was my response.  We agreed to get together later to discuss the details.

Now, two months later, after hours of walking in preparation for the trip; here I was on the trail with Mark and Connor, his 19-year-old son.  But, nothing I did prepared me for this trek.  “It’s like going for a walk in the woods,” Mark would say.  Hump!  Some walk in the woods.  Steep uphill climbs and difficult downhill descents, roots, rocks, streams and I couldn’t forget the three times I had fallen. It was beautiful beyond any picture I could have imagined with huge statuesque trees, breathtaking panoramic views of blue, cloudless skies, majestic mountains, rushing streams and flowing waterfalls; one of the most spectacular visions I had ever experienced. Still, I had had enough. I was tired, achy and ready to go home. Furthermore, thunderstorms were expected to roll in that night and continue through our fourth day of hiking.  The thought of having to maneuver through wet, slippery conditions was scary and something I did not want to deal with.  After all, this was my first time even sleeping in a tent. With the help of God, my friend and his son, I had made it up and down the mountains and through challenging terrains.  Could I make it up and down slippery mountainsides, mud and rushing streams?  A small part of me knew inwardly that if I had survived this far, then, with the continued help of God and my friends, I could do it.  But, the larger part of me felt as if my aching body could not tackle one more uphill and downhill climb over rocks, roots and muddy streams.  I had experienced enough.

“Okay” Mark said.  “We’re going to head to the car, drive up to the mountain, hike up 419 ft to Albert Mountain, hike down the back side, walk about 2.5 miles and camp at the shelter tonight.  Then, tomorrow, we hike back to the car and head home.”  My heart sank as I said weakly, “Okay.” I did not want to spoil the trip for them.  Plus, it was hard to admit to my friends that I wasn’t sure if I could do it. I had always been determined not to allow my age to be a deterrent to what I could do. I always tried to use common-sense when it came to new adventures. In fact, I had gotten my doctor’s approval before this trip. But, I still couldn’t forget that Mark was 10 years my junior and his son was only 19-years-old.  I knew, physically, both were able to continue the journey.  I wasn’t so sure about me.  Inwardly I prayed, “Lord, please let someone say they want to go home when we get to the car. I don’t know if I can do it. But, God, you are my all in all. Give me the courage and wisdom to speak up. Or, give me the strength to continue.  It’s in Your hands.”  As we continued down the mountain, his 19-year-old son said excitedly, “I can’t wait to climb up Albert Mountain and see the tower. The view is supposed to be spectacular!”  My heart sank a bit.  But, I knew deep inside that God was in charge and everything would be alright.

An hour later as we approached the car to prepare to head to Albert Mountain, suddenly, unexpectedly, Conner said, “I’m ready to go home. I want to get back to civilization where I have phone service and can take a hot shower.”  “Lord, thank You, thank You, thank You,” I said silently.   Mark said, “Wait a minute, you have two other people here who have a say.”  I quickly chimed, “I’m with Conner.” Then, followed with “Mark, how about you though, didn’t you want to see Albert Mountain?”  “I’ve already seen it,” replied Mark.  Relieved, I smiled.

Later, over a late breakfast at Huddle House, I admitted to the two my prayer about asking God to let someone say they wanted to go home, because I didn’t want to spoil the trip for anyone and I didn’t want to admit that I was ready to go home.  Conner looked up over his pancakes and said, “You know, I don’t know why I said that.  I could have easily gone up that mountain and back. It surprised me when it came out.”  I looked at him, smiled and nodded.

It didn’t surprise me.  God is so good all the time.  He knows what we need and rescues us even when pride gets in our way.

Heavenly Father, let me always remember that all I have to do is ask.  You are just waiting to take over and ease my burdens.