“The wise are patient; they will be honored if they ignore insults.” Proverbs 19:11 (NCV)

The package wasn’t delivered yesterday. I went to the mailbox at 3:15 pm and discovered mail had 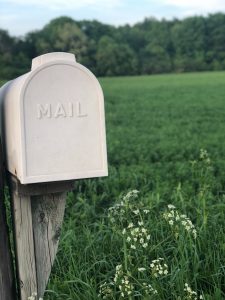 been delivered, but not the box.  I called the post office, no answer. I quickly decided this was not a battle to be fought.  The box wasn’t delivered; I wanted it.  I didn’t even know what was in it as my daughter and I had recently made several online purchases.  So, at 3:40 pm, I headed to the post office.  I gave the clerk my slip, he brought back a large box with sticky stuff all over it.  I looked at the clerk and he said he didn’t know what happened.  I asked to speak to the Postmaster.  He said he saw the mail carrier’s car video from yesterday and he could hear the dog.  So, he decided not to send her back with the package. I asked and found out he didn’t see the dog, he only heard him barking. I could quickly see where this was going and decided going there wasn’t worth it.  So, I pointed to the sticky package.  He said maple syrup from Amazon spilled on several boxes.  He looked sincere, apologized and said he would have called to hear my side, but he didn’t have my number.  I thanked him and left the post office with my box.  Guess what was in it?  A 20 lb. bag of dog food for Rise.  How ironic!!!

Driving home, I asked, “God, what was I supposed to get out of this?”  He whispered, “Don’t sweat the small stuff.”  And, in the scheme of things, He was correct as usual.  This was small stuff.

This could be the end of my saga.  But our God is an above and beyond God. This morning, I realized we were expecting a couple more packages. I didn’t want another “dog and new mail carrier” episode.  So, I called the Postmaster and said we were expecting more packages and asked was our regular carrier back.  He said “No, the same substitute carrier was delivering.”  All I could say was, “okay.” As I hung up the phone, I felt it would be alright.

Less than five minutes later, I heard a horn blow and Rise bark.  I felt calm as I walked outside.  Quickly, my calmness turned to unexpected joy, it was our regular carrier!  I smiled and said, “I am happy to see you.”  She laughed and said, “I told her (the substitute carrier) the ‘runaway barker’ would not come near her.” I, then, asked her to wait while I rushed inside to get her a tip.  When I got back, she had placed the large package and our mail in the laundry room.  As I gave her a $20.00 dollar bill, she said, “no you don’t have to do that”.  I smiled and said, “we appreciate all you do.  Also, tell your substitute carrier, we appreciate what she does also.”

It felt good to release this small stuff.  To me, this was a happy ending.  We got our regular carrier back despite being told we wouldn’t.  We got our boxes.  God is good.

God, thank You for showing me there is a lesson in everything.  Don’t sweat the small stuff is so appropriate, when I think about all the big stuff people are facing now.  Indeed, my episode was small.  Bless all of those going through big, difficult times now.  Lighten their loads as only You can.  Thanks again, Amen!!