For the past eight weeks I have been pulling weeds for my husband, Larry, with his lawn maintenance service.  Friday, September 27,  was my last day; my husband is semi-retiring on September 30.  Now, I didn’t mind pulling weeds every Friday for six to seven hours in the hot sun because I knew it was temporary.  I knew there was an end in sight.    I usually said pulling weeds was a labor of love because I was helping Larry.  And it was.  But I was also pulling weeds because he couldn’t find anyone willing to do this type of work.  It’s understandable.  So, here I was sweating buckets, bending, crawling and scooting on my knees pulling weeds. The saving grace was working with my friend, Jean, who was also pulling weeds alongside me.   Seems like you can do pretty much anything when the load is shared, and you realize it’s not going to last forever.

You know what? Pulling those weeds got me to thinking about my parents, William Louis Chever and Essie Mae Brown Chever.  Both worked the fields from sunup to sundown as sharecroppers in Georgia on Mr. Let Low’s farm (this is not the owner’s real name nor is it meant to be derogatory; it is simply the name my parents used to describe the owner.)  My dad said one year they had worked extra hard and had grown and harvested a huge crop.  He said he and mom just knew they had made enough from their share of the crops to pay their living expenses and have money left over.  They would finally have something to put in their pockets.  Well, Mr. Let Low told my dad, “Bill, you and Essie did really good this year, you came out even. Next year, you should be able to clear some money for yourselves.” Dad said he saw red; I can’t write what he said.  But he and my mom packed their bags, much to the protest of Mr. Let Low and left.  They moved to Jacksonville first and then made their way to St. Petersburg, FL where they stayed in a boarding house.   They lived in a couple of other rentals until they were blessed enough to get a unit in the projects.  Jordan Park was the opportunity my parents needed to get a decent life for their four children, later it became five.

Back then, in the 1950’s, most families living in the projects were comprised of a mom and a dad. My brother, Billy and I, were talking recently about how there were few single parent families living in Jordan Park.   There was a strong work ethic. Everybody that I remember had a job. Parents worked, sent their children to the neighborhood schools and came home after work.  Houses were clean and yards were kept up.  They even had unit inspections where Mr. Grogan came into your house to check and make sure you were taking care of the property. You had to qualify to move into the projects and you had to maintain a certain standard to stay in the projects.  My parents looked at it as a privilege and as a steppingstone. To them, this was temporary.  In 1963, we moved out of the projects into a house on Trelaine Drive So.  My parents were buying their first home.  They had gone from being sharecroppers to homeowners.

What does this have to do with relentless faith?  Well, pulling weeds for seven weeks in the hot sun for six to seven hours took faith; but this was my husband’s business, so I was benefiting from my labor.  However, this was nothing compared to my parents working in the field on someone else’s land from sunup to sundown five to six days a week with the hopes of making enough money to save and get ahead.  This took relentless faith amid adversities.

In my next blogs I will talk about life in Jordan Park. Please join me as I post a new blog each week sharing how my parents raised 5 children in the projects and none of us realized we were poor. 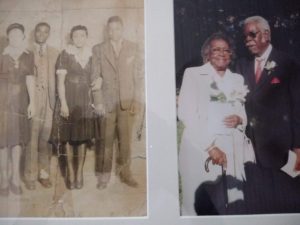 God, thank you for blessing us with wonderful parents who worked hard raising us and showing us how the power of love can lift us above all adversities.

(Mom and Dad are the couple on the right in the first photo; them a little over 60 years later in the second photo.)